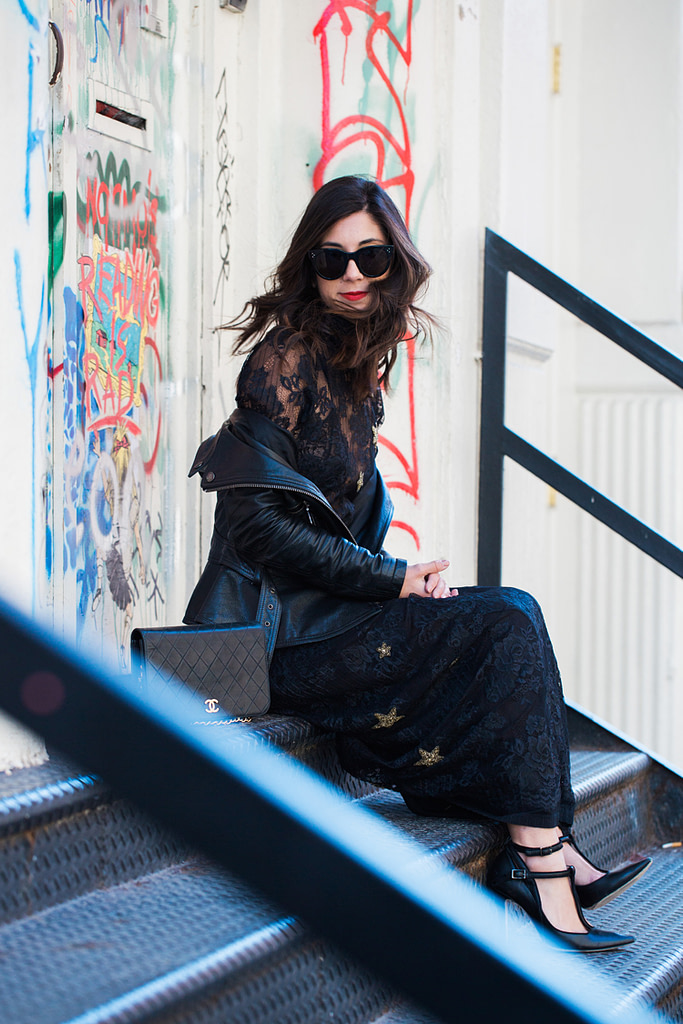 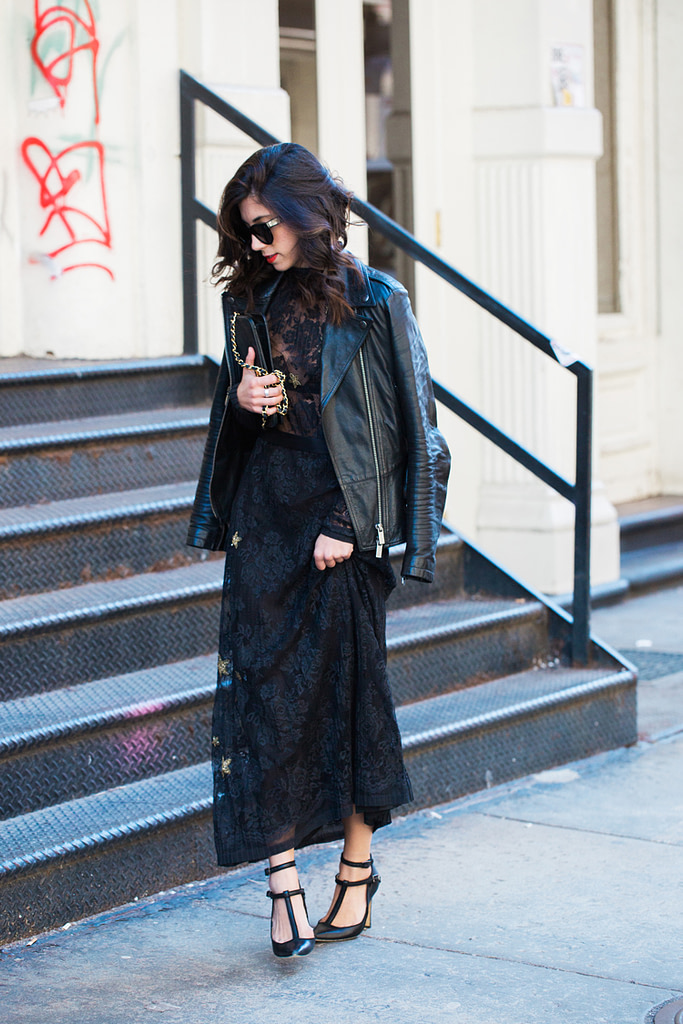 Dress: Georine (borrowed); Jacket: Alexander McQueen (similar style here); Shoes: Henri Lepore Dezert; Lips: Marc Jacobs "Amazing"; Bag: Chanel
Thirty.
Whew.
I said it.
(Looks over shoulder to see if anyone is listening.)
THIRTY!
Whew.
There. I yelled it! And you know what? I'm fucking pumped about it.
Am I surprised to say that I'm pumped? I'd be lying if I didn't admit that I'm a tiny bit surprised. Perhaps it's just me, but it seems when anyone brings up the idea of turning 30, a few phrases get thrown at you. "Now you're an adult!" or "Time to get serious." or my personal favorite, "30 is the new 20." Almost as if the past 10 years were a test run -- a practice round.
I'd like to officially go on the record to say, I sure as hell hope my 30s are nothing like my 20s. Not that I didn't enjoy my 20s (as you'll soon see in the bulk of this post, I loved my 20s), but because I've been there! I've done that. I've challenged myself in ways I never thought possible during my 20s and I don't want to look at this next decade as a repeat by any means. I want it to represent the uncharted. The frightening. The different. The new. The untamed. The fucking weird. And the fucking beautiful.
At this point, I would apologize for the swearing, but my soon to be 30-year old self doesn't want to ring in this year with an apology. She'd like to take a few shots of tequila tonight, romp around this city that she loves to the wee hours of the morning and rock and roll into the next 10 years. But before she does that, she'd like to take a moment and bid adieu to her 20s in perhaps the best way any 80s baby knows how: a montage highlight reel.
So dim the lights. Grab the popcorn. Silence your phones (OK, you don't really have to do that last one, but you catch my drift.)
My 20s in 2 minutes or less: Lived in two big cities that I've dreamed of living in ever since I was a little girl. Started a blog on a complete and utter whim in college, only to stick with it almost 7 years later. Worked at a few start up companies that are the cause of my early grey hairs (not complaining). Later worked at arguably one of the best companies in the world to work for -- and fell in love with the culture and the people. About 5 years later, I worked up the nerve to leave said job, to take another leap of faith (but that's another blog post, for another day).
I've fallen in love (several times). I've had my heart broken (several times). And each time I learned something new about myself and what I want in a partner. I've also learned to never settle. I've traveled to distant countries where I reveled in the differences that make this world so beautiful and varied. I've become a mom to one wonderful pup, Elvis. I jumped out of a perfectly good airplane (and landed safely). I ran my first marathon (and am looking forward to my second in a few months as a 30 year old!). I made new friends. I made some best friends. I lost some friends, too. I was reckless with my health. And then I was made painfully aware of it, for the better. I lost people I cared deeply for. And I miss their presence all the time.
I lived in Italy for a few months. I've eaten the most amazing pizza in Torino. I've heard a symphony play in the Sydney Opera House. I've touched the Western Wall. I've looked up at the vaulted ceilings of Haghia Sophia mosque. I've looked down at Horseshoe Bend. I've driven down the coast of California in a convertible and loved every minute of the wind in my hair. I've ridden in a hot air balloon over Turkey. I've gotten lost in Yosemite. I grew the most in San Francisco. I've found my home here in New York.
Here's to my 20s; they were a wild and crazy ride. And here's to my 30s, may they be even wilder, crazier and, with with any luck, I hope they bring the unexpected. I'm ready for it.
Photos by Lydia Hudgens

Beautiful elegant look, and happy belated birthday, you look so young for 30 <3

Aw! Hate that I missed wishing you happy birthday! Well, happy belated – may the celebrations continue! Your twenties sound amazing and I enjoyed watching the last five of them. I know your 30's will be awesome. Oh and can't wait for the blog post on your big leap from Google to your new gig.

Beautiful look to celebrations, we love the stars!

Happy Birthday! I'm also entering the 30's this year and I'm a mixture of freaked out and chill. It's still a few months away but I hope I approach it as gracefully as you!

Amazing post!!! I'm a year and a half into my 30s, and since I turned 30, I got engaged, started grad school, and got married. It's amazing how many huge life changes can happen in such a short period of time, and looking back, it seems so futile that I spent years in my 20s wondering (and worrying) that nothing ever seemed to change. I'm really no different at 31 than I was at 25 or 28. Just a little bit smarter, a little more confident, and a little bit more accepting of myself. Your 30s will be amazing! Happy Birthday!

Happy birthday! I hope I can look back on my 20s and approach my 30s in the same positive mindset!

Aw wow so beautifully said! Brought a tear to my eyes. Welcome young fashionista into your 30's (from another 30 year old)…its a cool kids club and its freaken awesome. Get used to being fab, like all the time. 🙂

Happy birthday Krystal! 🙂 I hope your 30s are a great decade! 🙂

Love that lace dress with the stars, so nice paired with the leather jacket 🙂

Away From The Blue Blog

Ah! So lovely! The perfect way to bid goodbye to the 20s and say hello to 30! Happy Birthday!!! May your next decade be full of beautiful views, wonderful loves, good food, gorgeous attire, and all good luck! <3

In love with this romantic look! The stars set off the look!

Looking so beautiful and like a royalty in this outfit! Your dress is simply incredible! Your 20s resume is so impressive and you can for sure say that you have LIVED them so well!
I wish you a warm welcome to 30s and I hope that these will be your best year by far! 🙂

Chills!! Such a good post and im happy to see I was there for a lot of those moments 🙂

Wise words from a wise lady. Happy birthday Krystal! Hope your 30s will bring even bigger and better experiences!

Happy Happy Birthday Krystal! I've been following your blog forever and am always super inspired by your travels, your pics, and mostly your honesty. Congrats on 30! Here's to another great year of more love, more learning, and more growth.
Cheers!

HAPPY BIRTHDAY GORGEOUS!!! <3 hope your day is as fabulous as you are!

Love this dress!! And 30 looks good on you! I'm turning 30 this year and you know what I'm excited for 30 as well. I'm ready to say goodbye to 20s. I feel like 20s was the years of learning about yourself and about what you want from life. And I mean I understand life is about constantly learning and adapting but if I felt like my 20s were a real struggle to find my own voice.

30S are awesome, babe! I'm excited for you too! In love with your dress:P